Just a quick note to let you all know that our traditional Awards and Christmas party will be held on Saturday 7th December at the Sports Club.
For those that don’t know…it’s always a great night of dancing and fun .
For newer members that perhaps haven’t been before, there are a number of awards to be given out which are shared between Chaingang and Chuggers including “Rookie awards” ……so you don’t want to miss out on potentially receiving one of those!
The theme for this year is “Apres Ski Party” where we will be playing some quality “Eurotrash” tunes and hopefully putting Barnt Green Sports Club on the map as one of the best apres ski venues.

There is no pressure to put on ski gear to join in the party and just dress as you want!

Tickets on sale now priced at £10 each to include food, disco and a treat from the “Vodka Luge” for what should be a great party…….

Please make sure you buy early so we can cater accordingly; and of course the night is open to all members and partners.

Tickets are available from Nick at the Sports Club or from Steve at Meadow Farm Butchers.

Barnt Green Chuggers, founded in 2005, and based at the Barnt Green Sports Club, provides fun and friendly running and cycling activities for local people of all abilities.

Whether you are a beginner, want to run or cycle to keep fit, or want to run/cycle further and faster, all are welcome.
More about us

This is a fun group of runners of mixed ability who meet on Monday nights. We have runners who just want to run at a gentle pace to some which are happy to push themselves and run without talking, and all the levels in between. Whichever pace you want to run at we have a group for you, so you never run alone.

We are a small local club of all ability cyclists, who regularly cycle on Wednesdays and weekends. Our Chaingang riders need to join the BG Sports Club. This gives access to the club, its bar, social and changing areas. We don’t compete, but we do cycle as groups in charity rides, bikeathons and endurance challenges.

Dear All The Midsummer Run/Ride to the Weighbridge pub (http://www.the-weighbridge.co.uk/index.htm) in Alvechurch will take place on Monday 25th June The idea is that you run/ride to the Weighbridge in time for a curry at ~8.30 pm.  Groups are free to self-organise and take shorter or longer routes with different start-times as appropriate.  There will definitely be […]

Mike D has prepared some invaluable advice about riding longer rides. Whether you are just wanting to do longer rides, or preparing for P2P – the tips below will hopefully help. The P2P Charity Ride seems a long way off (33 weeks from 20/11) but to give yourself a chance of really enjoying it, you […]

This year we’re planning to hold this on the same day as Saturday morning Chaingang, so hopefully it will make it more accessible.

More details to follow but the broad plan is to start (not too early) for a leisurely ride which will suit all riders (and take into account weather conditions). Alongside this will be an option to walk, for those who don’t fancy riding. Then we all meet up at an appropriate venue.

This year we aim to find a drink/food stop closer to home so people can ditch bikes before having a few beers, if they so wish.

Save the date!!!
Sedge on behalf of Chaingang Steering Group 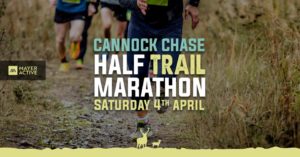 From their website: 13.1 miles of undulating trails around the area of outstanding natural beauty of Cannock Chase. In our view a true trail runners paradise! The only single lap Half Marathon on Cannock Chase.[...]
View Calendar
Add

From the CFC Website: Welcome to the 9th edition of  the Cyclists Fighting Cancer Sportive.  Once again we are offering a great day out on the bike up, over and through the Cotswolds. The four[...]
View Calendar
Add