Hagley Run, over the Waseley and Lickey Hills, back to Barnt Green

We have a plan to run the Hagley route next Monday (21st June). This is a classic run over the North Worcestershire Hills, best undertaken at this time of year when we’ve got maximum day length.
Have a look at Simon’s post to see the route: https://www.relive.cc/view/v1vjegQN3Yq 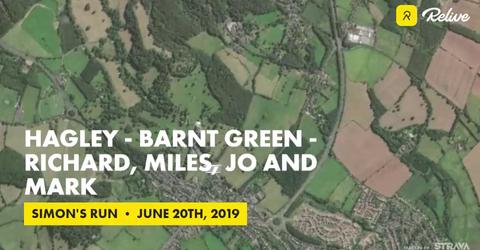 When? Suggest we assemble at the club for 6:45pm, in order to depart for the Hagley start by no later than 7pm.
(Last time we ran it, gently, it took 2½ hours).
Where? Lifts needed from other halves, offspring or other runners. Please drop off at the corner of Hall Lane and Hall Drive, Hagley (postcode DY9 9LH, or what3words teach.tall.will), where a small gate leads into a footpath into fields and the hills.
Route? a pretty route over the Hagley, Waseley and Lickey Hills. The running is relieved by steady levels, downhills and wonderful views as well as a number of stiff climbs.
Who? We are looking for a couple of run leaders to coordinate and arrange for each group. It caused a bit of mirth, but this is the point I say I’ll be away and won’t be able to run it, unfortunately.
Richard

Runners meet at the BG Sports Club and are usually back to rehydrate by 9pm -9.15pm.
We generally have at least four groups of different speeds and distances who run distances from 3 to 6 miles come rain or shine.

We usually have 5 varied groups,covering a range of speeds and distances to suit all abilities.
We also have fortnightly Saturday morning rides.

This website uses cookies to improve your experience while you navigate through the website. Out of these, the cookies that are categorized as necessary are stored on your browser as they are essential for the working of basic functionalities of the website. We also use third-party cookies that help us analyze and understand how you use this website. These cookies will be stored in your browser only with your consent. You also have the option to opt-out of these cookies. But opting out of some of these cookies may affect your browsing experience.
Necessary Always Enabled
Necessary cookies are absolutely essential for the website to function properly. This category only includes cookies that ensures basic functionalities and security features of the website. These cookies do not store any personal information.
Non-necessary
Any cookies that may not be particularly necessary for the website to function and is used specifically to collect user personal data via analytics, ads, other embedded contents are termed as non-necessary cookies. It is mandatory to procure user consent prior to running these cookies on your website.
SAVE & ACCEPT